Portugal has had a significant effect on world history as a maritime power and explorer. It made a lasting impact on culture in Brazil, Asia, and Africa.

Sharing a border only with Spain, Portugal shares a lot of similarities with its neighbor on the Iberian Peninsula. This includes membership in the European Union, the euro currency, and NATO. Portugal expects to lose population through at least 2060. The most moderate scenario shows a loss of 10.5 million people in 2012 to 8.6 million in 2060 due to dropping birthrates, low immigration, and significant aging of the projected population.

Portugal's economy was also struck by the great recession and just gained traction in 2015. Using FisherSolveTM Next, Figure 1 shows Portugal's population has been flat and is now declining at an estimated rate of -0.25% in 2020. The economy has continued to rebound and grew at about 2% GDP in 2019. 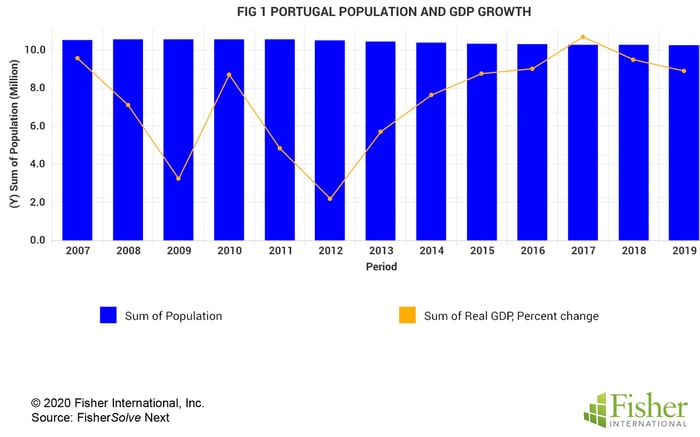 Although Portugal and Spain share many similarities, Figure 2 shows Portugal's unemployment has come down much further while inflation remains tame. 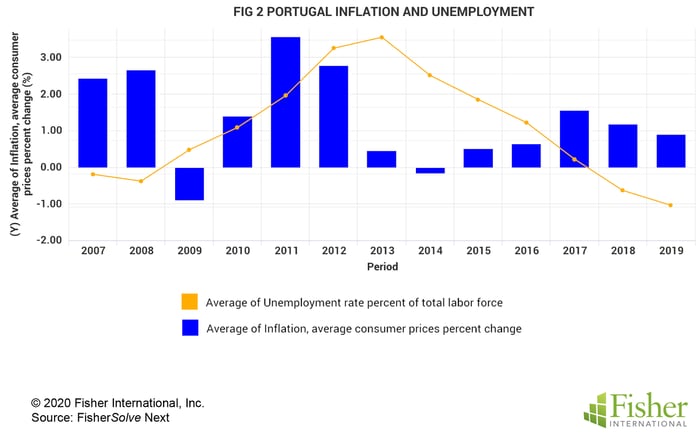 Portugal’s major tissue import partners are shown in Figure 3. Spain makes up most of the tissue imports with Italy, Austria, France, and Germany supplying all but 1-2% of the rest. Portugal's overall import volume has decreased through the period by slightly more than one third.

Figures 4 shows Portugal's tissue exports for the same period. Again, Spain represents the overwhelming majority of trade transactions, while the United Kingdom is a new outlet for Portuguese tissue producers.

Comparing Figures 3 and 4 shows that while Portugal has reduced its tissue imports, the tissue exports have risen even faster, making Portugal a net tissue exporting country. If this reversal were to continue, Portugal could easily export three times as much tissue as it imports. The net tissue balance shows Portugal is now exporting about 25% of its tissue production capacity.

Figure 5 shows the evolution of Portugal's tissue capacity over the same period. This resulted in a net increase of six tissue lines to Portugal's production capacity.

Portugal's tissue grade mix is shown in Figure 6. The overwhelming majority is consumer-tolerant tissue, but specialty tissue plays a larger part than many markets. 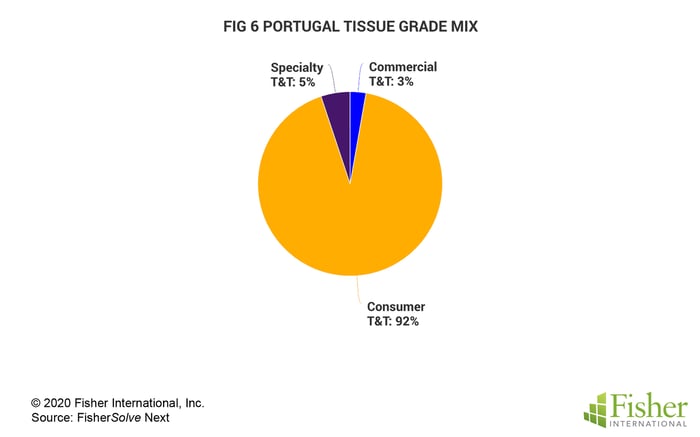 Figure 7 shows the furnace used by the various tissue products within these grades. We see the end product playing a significant role in consumer facial, consumer tall, and crêpe wadding. The majority of consumer bath tissue is hardwood pulp. In this case, the hardwood pulp is integrated eucalyptus fiber. 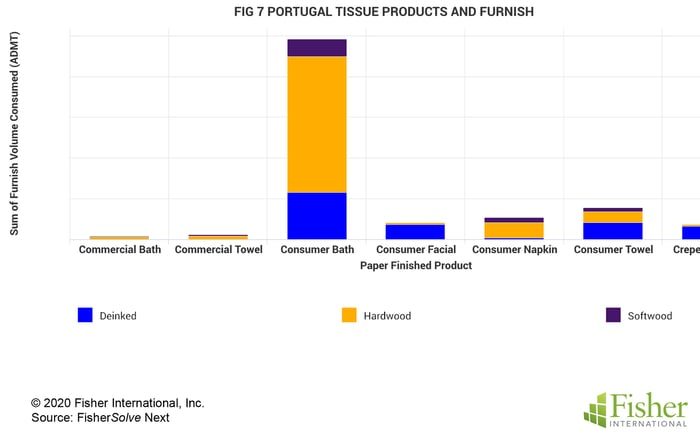 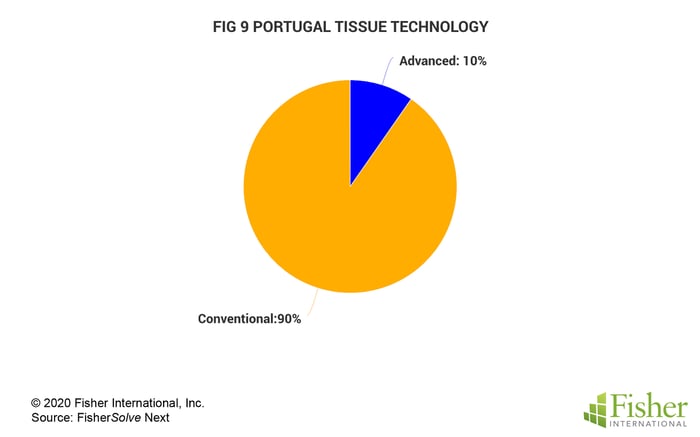 Portugal's overall fiber sources for tissue are shown in Figure 11. Kraft bleached eucalyptus hardwood pulp makes up over 50% of the total fiber used in tissue making. The second most significant contribution comes from recycled paper.

Newer and wider machines are considered to have the advantage. The size of the bubble represents the overall capacity of each countries tissue business. Portugal has the latest tissue machine fleet on average but tends to be narrow width.

Portugal's relative application of advanced tissue technology is compared to the other trading partners in Figure 13. Portugal's comparable fractional use of this technology probably matches the others, but the overall capacity of advanced technology tissue produced is low. 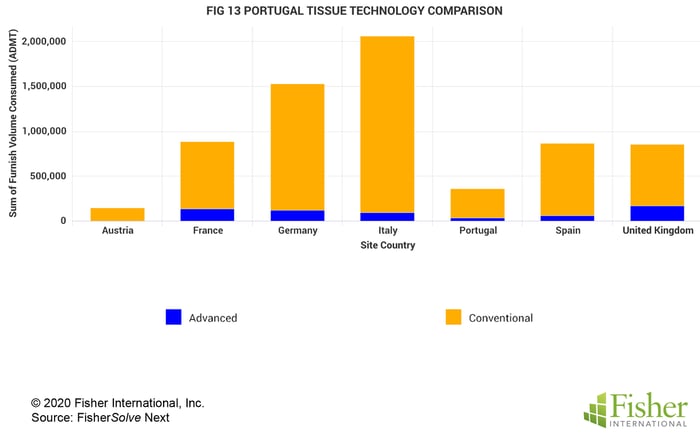 Portugal is advantaged by relatively high degree of tissue fiber integration. Figure 14 shows this advantage in a cost comparison to the selected trading partners. This analysis shows Portugal is, on average, the lowest cost tissue producer of the group. Austria, Spain, and Italy are the nearest cost competitors.

Carbon emissions is the newest frontier in comparing tissue production efficiency. Figure 15 shows the cradle to gate average carbon emission per ton for each of the countries in the comparison group.

France has a significant advantage from its carbon-free nuclear-powered electricity grid. Spain, Portugal, Austria, and Italy are very similar to each other. The United Kingdom and Germany are disadvantaged due to high emissions from fossil fuel consumption in the tissue mills (UK) or electricity grid (Germany). This can be expected to add to the cost of tissue production shown in Figure 15.

Portugal has enjoyed a better recovery from the great recession than most of its trade partners. The long-term forecast for population decrease will be a significant challenge. The modern tissue assets and low costs due to fiber integration should continue to support the transition from a tissue importer to a tissue exporter.

Will Portugal continue to invest in new production assets to support export growth or will imports from the its larger European neighbors push back?

Fisher International will continue to review the development of Western Europe’s tissue business and share the implications for our industry with its customers.

Bruce Janda has over 40 years of experience in the paper and non-woven industry, specializing in tissue and towel products and processes, from concept through manufacturing and commercialization. Bruce has a BS in Chemical Engineering from Michigan Technological University and earned his MBA from the University of Wisconsin. He is a TAPPI Fellow, holds 19 US tissue and papermaking patents, and writes a regular column for Tissue World Magazine.