Suzano, a Brazilian pulp and paper company that specifically deals with eucalyptus sampling, has recently announced plans to build a new pulp mill in the municipality of Ribas do Rio Pardo in the state of Mato Grosso do Sul. When finished, this new project (referred to as the Cerrado Project) will be the world’s largest pulp mill and will have the capacity to produce 2.3 million tons of eucalyptus pulp annually. With Suzano already being the largest pulp producer in the world with a presence in over 80 countries, this new project is expected to open a number of doors for the pulp industry—and for Brazil as a whole.

What Kind of Opportunities Will This Create?

Why is This Important to the Industry?

Suzano has expanded steadily through organic growth as well as acquisitions over the past 14 years — the largest growth resulting from the acquisition of Fibria, which was completed in 2019. Adding new products to their portfolio, such as Tissue and Towel in 2017, has also helped the company maintain steady growth and establish itself as a major global player.

However, market pulp still remains the primary focus of Suzano’s product portfolio, more specifically Bleached Eucalyptus Market Pulp (BEK). In 2014, Suzano had a roughly 17% share of global capacity in BEK. So, it was no surprise that when the acquisition of Fibria was complete, the company leapfrogged to the number one position and clearly became a global market leader with 39% share. 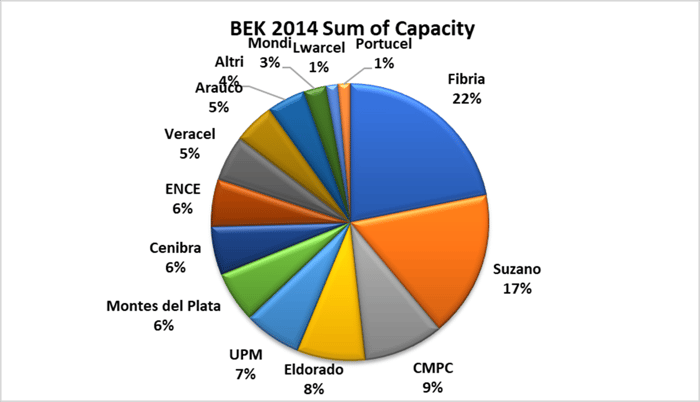 Bleached Hardwood Kraft Pulp has been in steady decline since 2007, while eucalyptus has seen continued growth at a rate of roughly 5.5% CAGR. Hardwood species in North America take decades to mature before harvest, while Brazilian plantation eucalyptus takes on average 7 years – making eucalyptus a competitive and cost-effective alternative.

Currently, the primary use of hardwood market pulp is in the Tissue and Towel segment, which has seen steady growth (roughly 5% CAGR), while the second largest consuming segment is Printing & Writing, which has been in decline for some time.

Important questions industry participants need to keep in mind regarding this new Cerrado project include:

Industry News
After Investor Purchase, Whakātane Mill Will Remain in Operation
In March of this year, Bay Plenty’s Whakātane mill announced that it was expecting to shut down after nearly 80...
END_OF_DOCUMENT_TOKEN_TO_BE_REPLACED