Australia’s log exports totaled 218 km3 in January 2021, down 9.5% on a year earlier as Chinese import bans continued to impact the trade. The result would have been even lower had it not been for shipments to India rising steeply in January. However, trade with India comes at a cost, evidenced by the average export price plunging 16% compared with the prior month, falling to USDFob120/m3.

January is always a soft month for exports, but as the chart below shows, like December before it, exports in January were particularly soft. The other feature is the fast-diminishing role of exports to China, and the significance of the rise in exports to India. 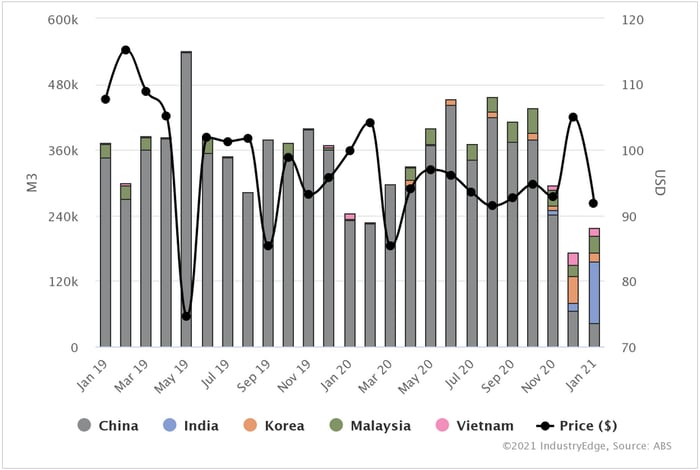 Since the beginning of the challenges with the China trade, there has been speculation that resource hungry China would turn to New Zealand – already a massive supplier of logs to China. The chart here shows some uplift in New Zealand’s exports, but probably not sufficient to replace all the volume typically supplied by Australia. 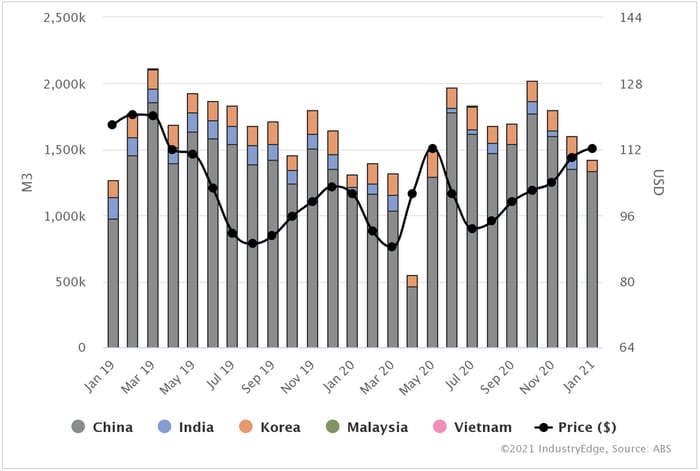 “The decline in Australia’s log exports is well beyond the typical seasonal downturn. Until recently, the only export market of any size was China. When they look at the latest data in Wood Market Edge online, our clients can see why, with average export prices plunging as other markets take up only some of the slack.

“Industry is racing to identify alternative markets, but the reality is that the long-term future must lie in increased local processing. That is more complex to achieve than to say, but it is clear there are few really sustainable alternatives.

“What is most important is that Australia is increasingly reliant on imported sawnwood during periods of peak demand – like right now. We need to get past that and ensure we are self-sufficient for our future built environment needs.”

Subscribers to Wood Market Edge online have 24/7 access to extensive and comprehensive data visualizations for all of Australia and New Zealand’s trade in wood resources and products, including a library of detailed, downloadable data files. 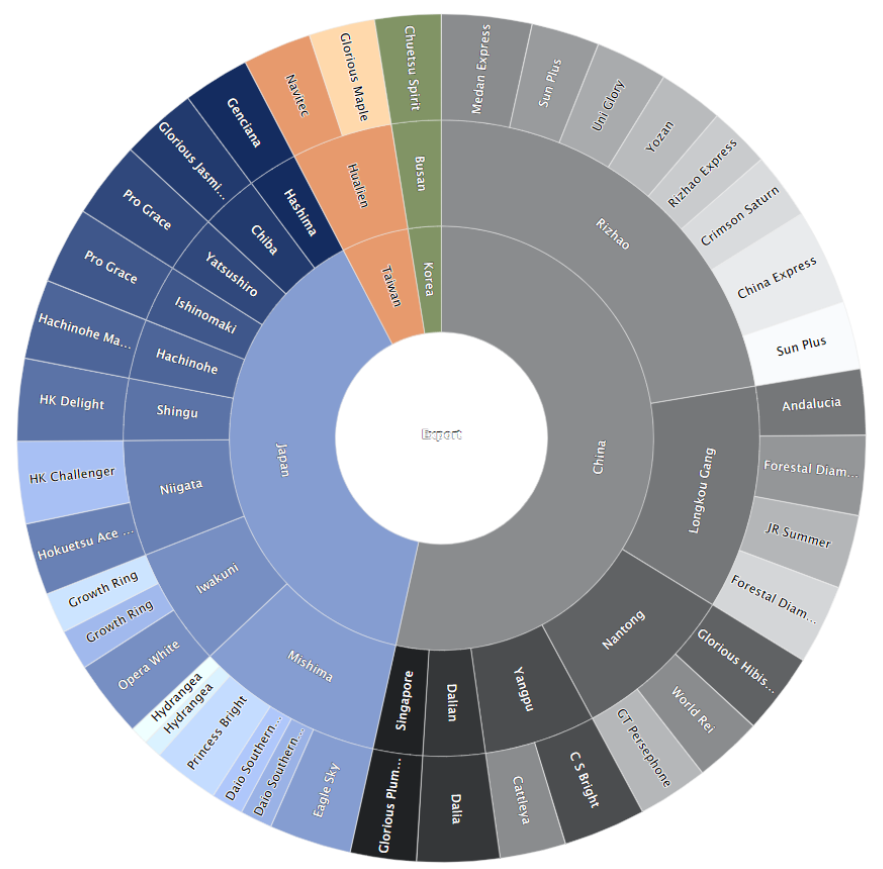 Wood Exports
Woodchip Exports: Why IndustryEdge Tracks Vessel Movements
Almost every month, IndustryEdge is asked why it tracks woodchip vessel movements, especially into and out of...
END_OF_DOCUMENT_TOKEN_TO_BE_REPLACED 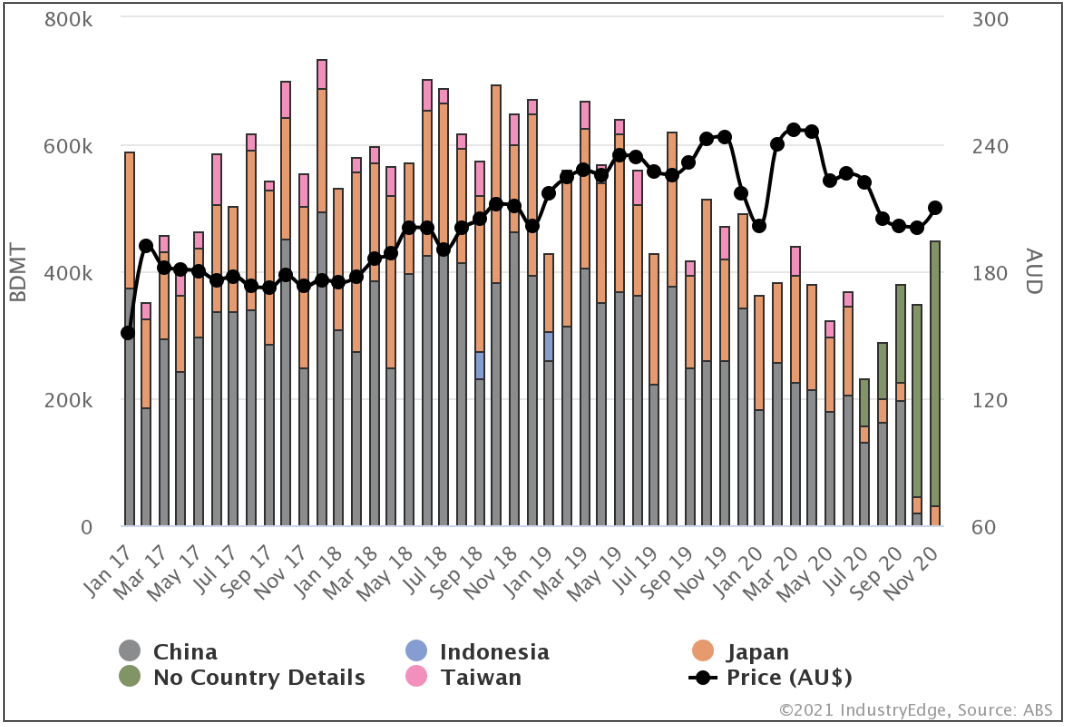 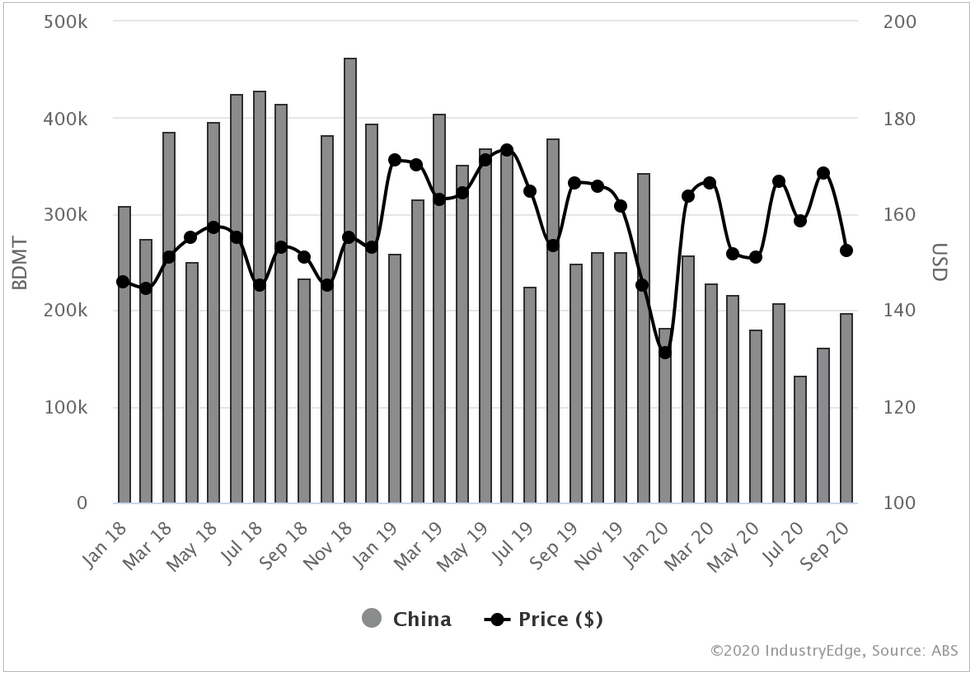