US Forest Industry Continued Recovery in July, but is Growth Slowing?

US forest industry performance in July and August was recently reported by both the US government and the Institute for Supply Management.

Total industrial production (IP) rose 3.0 percent in July (but -8.2 percent YoY) after increasing 5.7 percent in June; even so, the index in July was 8.4 percent below February’s pre-pandemic level. Manufacturing output continued to improve in July, rising 3.4 percent. Most major industries posted increases, although they were much smaller in magnitude than the advances recorded in June. Motor vehicles and parts registered the largest gain in July (+28.3 percent); factory production elsewhere advanced 1.6 percent. Mining production (mostly oil production) rose 0.8 percent after decreasing for five consecutive months, whereas the output of utilities increased 3.3 percent from demand for air conditioning.

The Institute for Supply Management’s (ISM) monthly sentiment survey showed US manufacturing expanding more quickly during August. The PMI registered 56.0 percent, up 1.8PP from July’s reading. (50 percent is the breakpoint between contraction and expansion.) All of the sub-indexes reflected increased activity, although the pickup in slow deliveries and shrinking inventories suggest producers are struggling to bring product to market.

All of the industries we track expanded. Comments from respondents included: 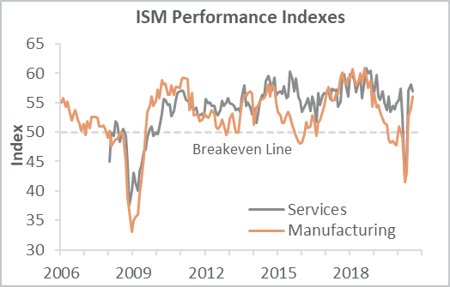 Findings of IHS Markit’s August surveys generally agreed with their ISM counterparts. “The manufacturing upturn gained further ground in August, adding to indications that 3Q should see a strong rebound in production,” wrote Markit’s Chris Williamson, although he observed the mix of new and export orders is creating “an unbalanced recovery in favor of larger firms.”

On the services side, “Surging inflows of new business... left [firms] struggling to meet demand,” Williamson continued. “The increase in backlogs of work bodes well for robust output growth to persist into September. However, the survey also highlights how the rebound is very uneven and the recovery path remains highly uncertain. Companies across the board also remain concerned about resurgent virus infections and the durability of demand in the coming months after the initial rebound potentially fades, with uncertainty over the Presidential election adding further risks to the outlook for many companies,” he concluded.

The consumer price index (CPI) increased 0.6 percent in July (+1.0 percent YoY)—one fourth of which was attributable to a 5.6 percent jump in the gasoline index. In addition, the index for motor vehicle insurance increased sharply (+9.3 percent) along with shelter (+0.2 percent), communication (+1.9 percent), used cars and trucks (+2.3 percent), and medical care (+0.5 percent). These increases were partially offset by decreases in the indexes for recreation (-1.2 percent) and food (-0.4 percent)—especially food at home (-1.1 percent).

The producer price index (PPI) followed its recent seesaw pattern by increasing 0.6 percent in July (-0.4 percent YoY)—the largest rise since October 2018. A 7.8 percent rise in the index for portfolio management was a major factor in the advance in prices for final demand services, whereas a 10.1 percent jump in gasoline prices dominated the final demand goods index. 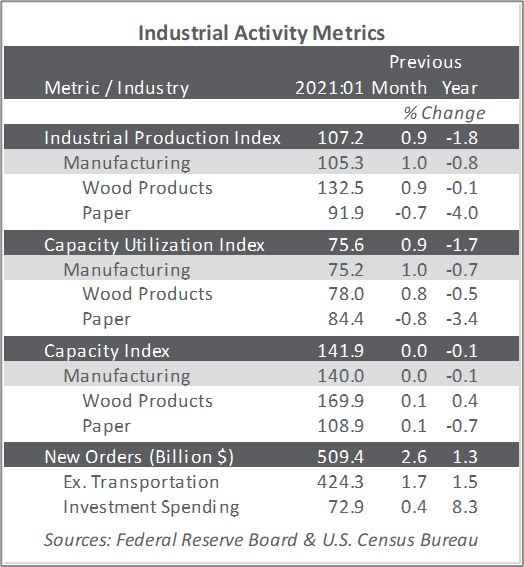 US forest industry
US Forest Industry & Manufacturing Continue to Expand
US forest industry performance in January and February was recently reported by both the US government and the...
END_OF_DOCUMENT_TOKEN_TO_BE_REPLACED 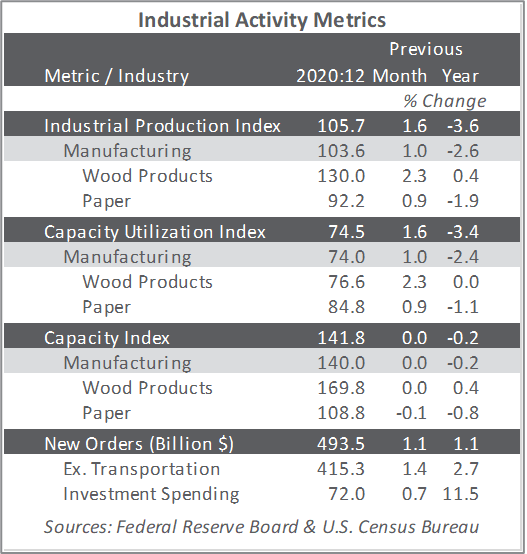 US forest industry
US Forest Industry, Manufacturing off to Strong Start in 2021
US forest industry performance in December and January was recently reported by both the US government and the...
END_OF_DOCUMENT_TOKEN_TO_BE_REPLACED 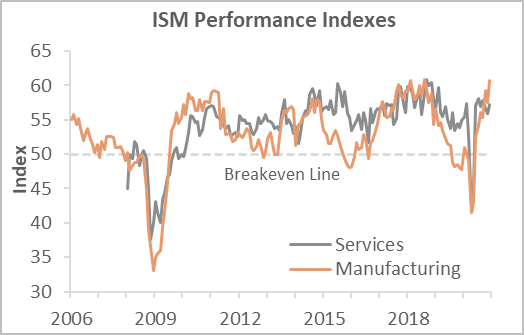 US forest industry
US Forest Industry, Manufacturing Performance Steady Despite Volatile 2020
US forest industry performance in November and December was recently reported by both the US government and the...
END_OF_DOCUMENT_TOKEN_TO_BE_REPLACED