CEPI announced in late April that European mills must begin to make difficult decisions regarding a temporary halt of production across Europe due to the extreme energy price surge following the Russian invasion of Ukraine. However, they did suggest one possible option to maintain operations despite energy shortages: temporarily switch from natural gas to less environmentally friendly energy sources such as oil or coal. But would oil or coal be a proper (and feasible) substitute for natural gas in European mills? And would this go over well now that sustainability has become a significant priority amongst consumers?

In 2021, 49% of Russia’s oil was exported to OECD Europe, and while we’re not sure when or if Europe will put sanctions on Russian oil imports, brent crude oil prices are already hitting 10-year record levels, almost reaching the same level as in 2012 and increasing six times the price in 2020. 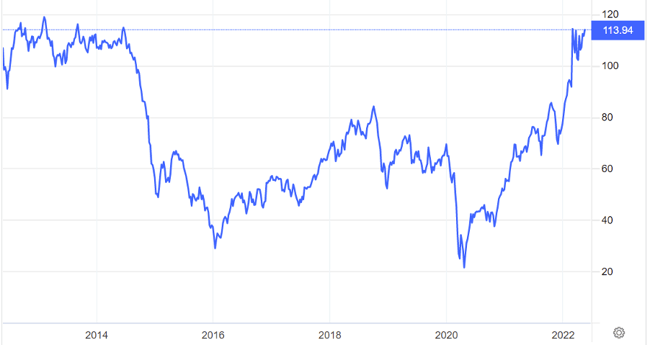 Poland is the biggest coal producer in OECD Europe, occupying 96% of 57.2 MT of total coal production in 2021 – which represents a 50% capacity reduction in Europe since 2010. And while coal is not a favorable energy source in Europe, the price also soared four times since earlier this year. 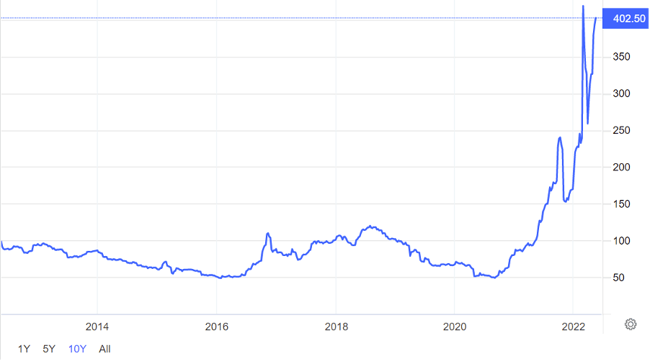 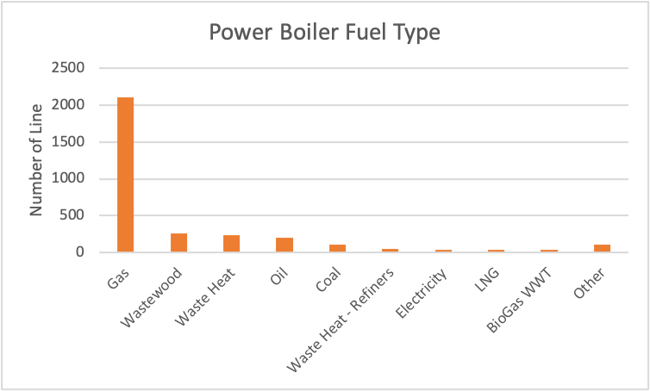 Are soaring fuel prices unique to Europe? If we focus on Asia, we see similar price trends in both China and India – the top coal producers. China’s coal price levels reached a 10-year high at end of 2021 and remain on the historically higher side, which has forced many paper mills in China to cease production.

Demand for electricity and fuel has been expanding in India as its economy has grown, although as 20-30% of its coal is imported, the devaluation of the Rupee has also pushed coal prices higher.

While it’s not a feasible short-term solution for the paper industry to switch fuels, energy costs have become a significant factor of manufacturing costs. Taking containerboard manufacturing cost for example, in 2020, the average energy cost in China, India, and Germany was below 75 USD/FMT, while in 2022, the energy cost has been as high as 230+ USD/FMT, as seen below.

Taking all of these factors into consideration, some important questions to consider include:

For a deeper look into answering the questions, talk with an expert at Fisher International who can help your business formulate an actionable plan with a high degree of accuracy. Fisher customers also have access to Fisher International’s business intelligence platform, FisherSolve Next, which provides detailed information on every paper and pulp mill in the world. 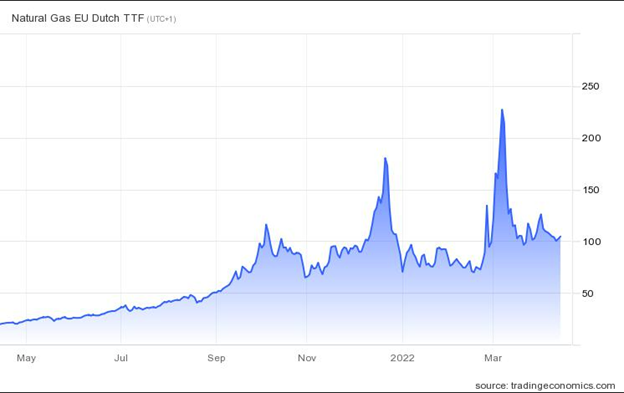 Energy Pricing
How Are Energy Prices Impacting the P&P Industry?
The global economy has been navigating evolving supply chain crises since mid-2020, and some of the associated...
END_OF_DOCUMENT_TOKEN_TO_BE_REPLACED