The pulp and paper industry enjoyed a collective sigh of relief earlier this month when the Finnish paper workers’ strike reached a resolution.

Finland is the largest overseas pulp and paper products exporter in the European Union, so when producers like Metsa Group announced a force majeure Jan. 27 that resulted in a shutdown of all its mills, anxiety set in.

According to FisherSolve Next data, Metsa, along with fellow Finnish companies UPM and Stora Enso, produce 7 percent of the world’s softwood fiber and 15 percent of Northern Softwood fiber.

News from traders indicated softwood fiber prices in the market increased during the short-lived strike, and some hardwood fiber suppliers such as Suzano, Klabin, and Eldorado considered destocking their products as price gaps for the two grades widened.

The recent labor agreement should restore buying confidence in the Finnish market as the country exports more than half its capacity. The Market Module within FisherSolve Next shows the bulk of Finnish exports go to European buyers.

Potential impacts of the recent strike, at this point, are still speculative. However, we can use FisherSolve data to analyze past disruptors and better understand how certain products and sectors of the industry manage everything from work stoppages to natural disasters to stifling government regulations.

Here are a few examples:

One of the most chilling natural disasters in recent memory, the tsunami that decimated Japan’s Miyagi, Hokkaido, and Ibaraki regions in March 2011, crippled several paper mills.

Nippon Paper’s Ishinomaki mill was arguably the saddest story for the industry after the disaster. Floodwaters ravaged the lower floors of the mill, destroyed stock and machines, and injured one employee.

Operations at the mill completely stopped. According to Nippon, it took six months for the mill to reconstruct its first machine for operation.

FisherSolve Next data shows the Ishinomaki mill went from running 10 machines in 2010 to only two in 2011 following the tsunami. Production was a mere 20 percent of 2010’s output. Remarkably, Nippon managed to get six machines operating in 2012 to regain (and maintain) 80 percent of production compared to its 2010 numbers despite completely abandoning newsprint. 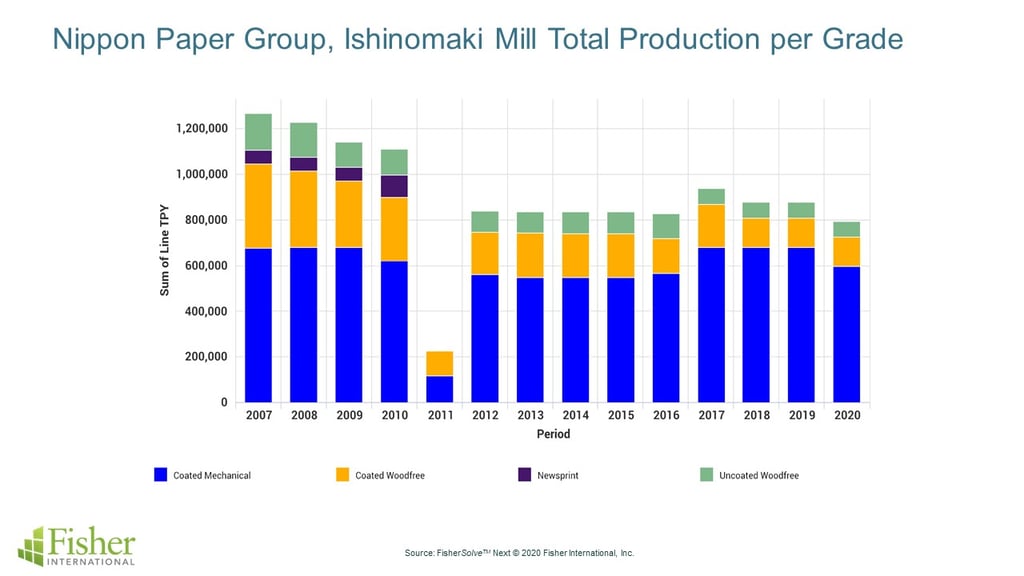 Ishinomaki, though one of the most extreme cases, was just one of several mills affected by this tsunami. In fact, FisherSolve shows printing and writing paper production in the country dropped almost 20 percent from 2010 to 2011. 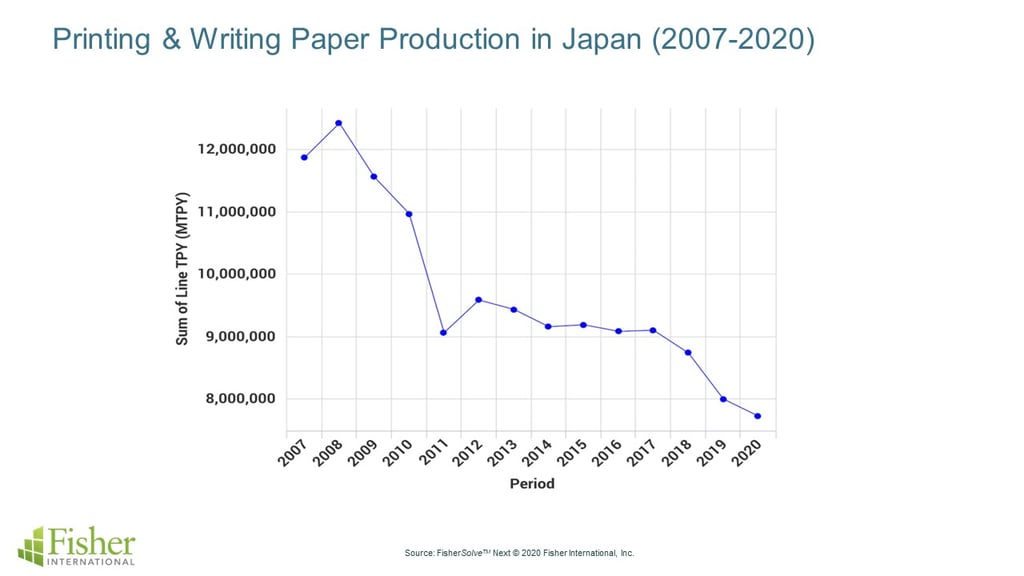 However, if there was a silver lining for damaged mills, demand for printing and writing paper products was declining in the years before the tsunami. With that in mind, mills didn’t have to restart all damaged machines.

In an effort to reduce waste going to landfills, China imposed tighter restrictions on imported OCC (one of several types of recovered paper) in 2017. This was the result of years of ‘off-quality’ recovered paper being imported by China. Events since then have caused disruption in the trade of OCC, and China’s recovered paper problem has become a significant concern for North American exporters.

As a result of tighter quality control on OCC imports, supply to China dropped noticeably after July 2017. The reduction of imported OCC affected all countries exporting recovered paper to China. 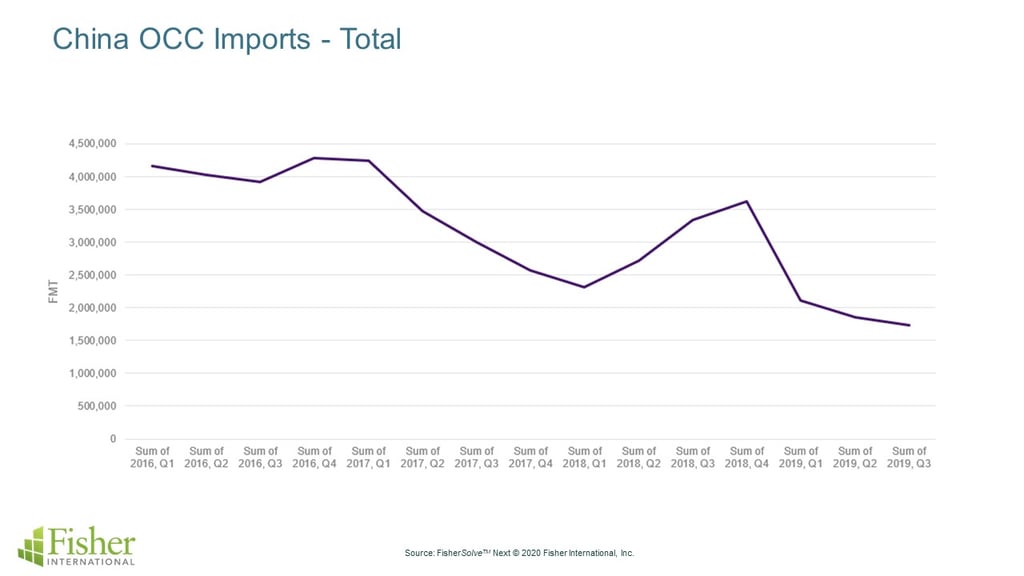 To exacerbate the American challenge of pinpointing the proper destination for OCC, President Donald Trump imposed a tariff on some Chinese goods in March 2018. China retaliated with a 25 percent ‘counter-tariff’ on imports from the US, including OCC.

This trade tactic took some time to show up in the economic data, but it ultimately caused a rapid decline in exports as the US became non-competitive compared to other suppliers. The drop in demand has caused pricing levels to drop to historic lows (particularly in  Europe and North America) with over-availability of OCC on the global market. 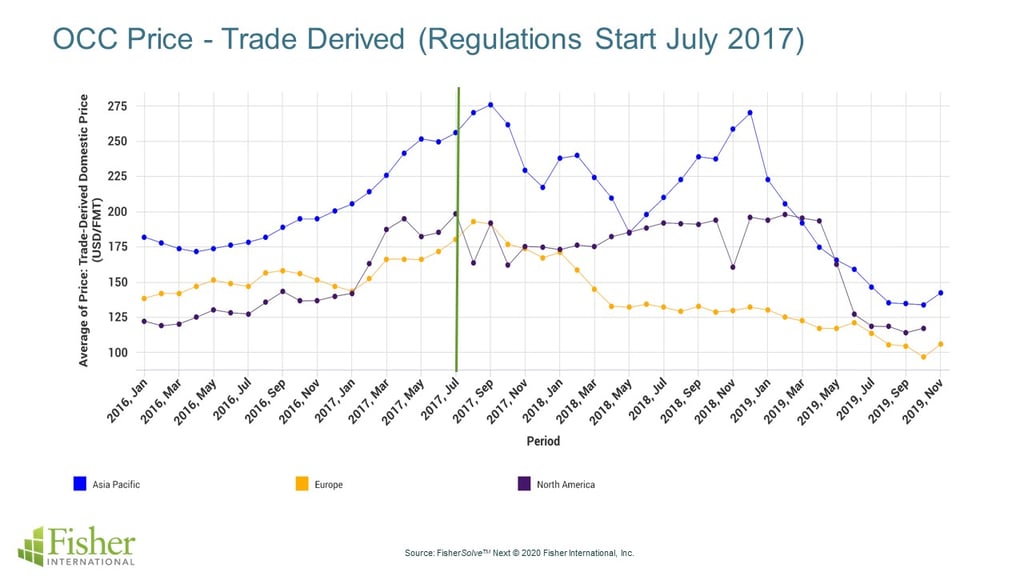 China and the US have since signed Phase 1 of a new trade agreement that encourages expanded free trade between the two nations, but the deadly coronavirus is an added layer of complication that will likely affect trade in the near term.

While the recent devastating wildfires in Australia are fresh on the industry’s mind, the two-year wildfire run in the Canadian province of British Columbia (BC) from 2017-2019 was crippling for timber and fiber production.

Forest2Market, Fisher International’s sister company, noted a record 4,600 square miles of BC landscape went up in flames in 2017. The record lasted all of one year as the 2018 wildfire season consumed 5,228 square miles, according to government data.

The unfortunate trend ended in 2019 as British Columbia’s data indicated “overall fire activity in 2019 was well below the 10-year average and was the second-least-active wildfire season since 2011.”

However, the impact has been felt at each step of the supply chain from forest to mill.

Due to damage from both wildfires and the Mountain Pine Beetle (arguably a bigger problem for BC timber companies), annual allowable cuts (AAC) set by the Canadian government have been reduced by about 20 percent from historical norms. In July 2019, Forest2Market’s Thomas Bennett said AAC numbers are not expected to recover until 2080. 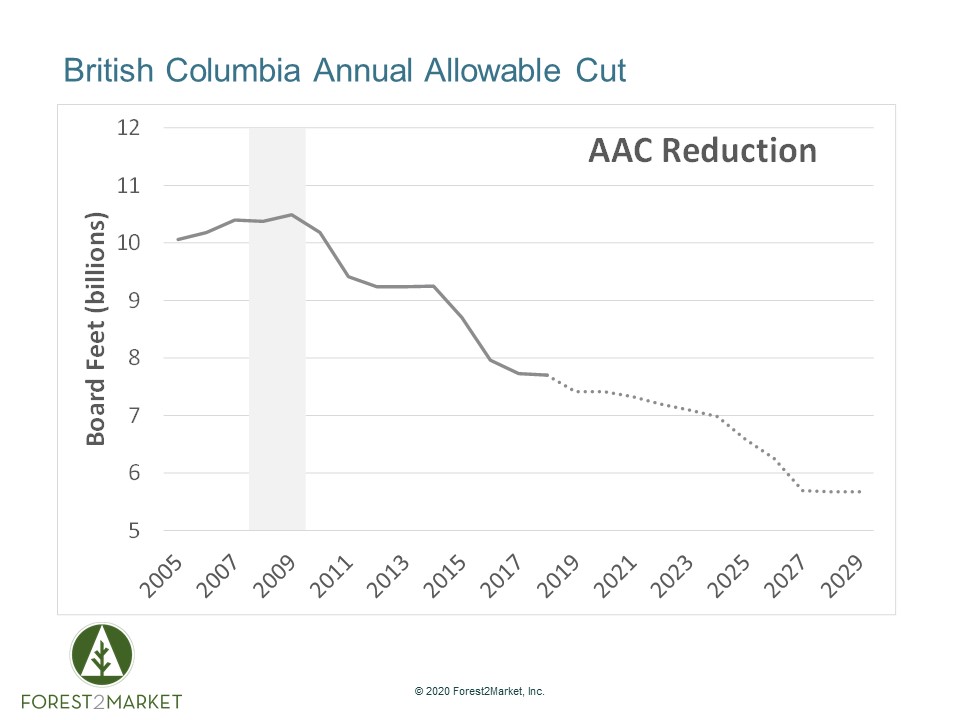 Prices stabilized slightly for hardwood pulp in 2019, but softwood pulp continued to climb. 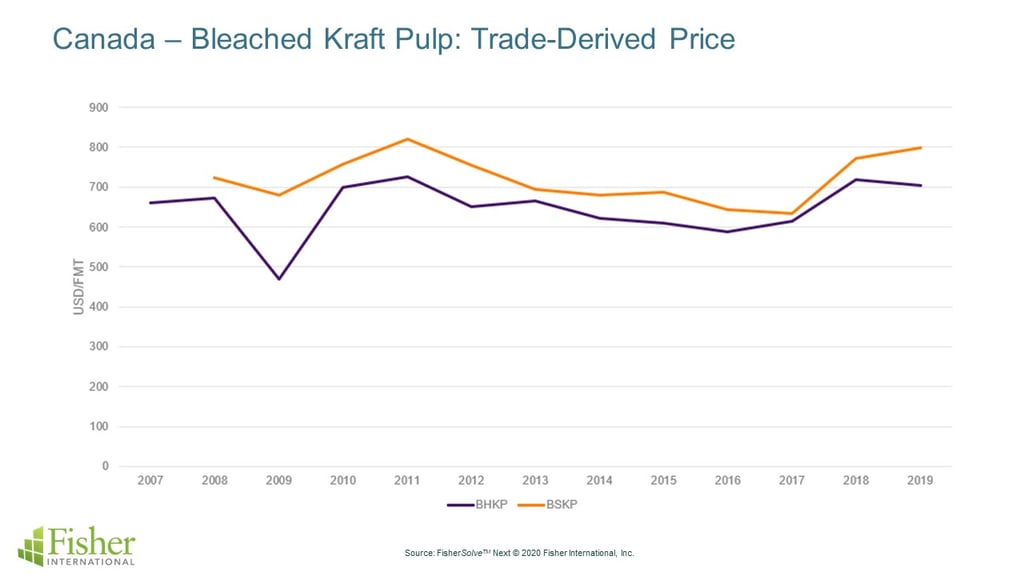 Market disruptors can appear in several different forms, from work stoppages to natural disasters and government regulations. These disrupters also add additional layers of complexity for a wood supply chain that is increasingly global in scale; a disruption in a single influential market does, in fact, ripple outwards to impact markets across the world.

When these unexpected and unpredictable events hit the global pulp and paper supply chain, our experts at Fisher International and Forest2Market can help navigate muddied waters using best-in-class data and analytics, as well as and market expertise and guidance.

Industry News
After Investor Purchase, Whakātane Mill Will Remain in Operation
In March of this year, Bay Plenty’s Whakātane mill announced that it was expecting to shut down after nearly 80 years...
END_OF_DOCUMENT_TOKEN_TO_BE_REPLACED