Recently, China was hit by one of the worst power shortages the country has experienced in a decade — creating a major energy crisis for a number of provinces. Since the crisis began, a growing number of paper producers across China are feeling the pinch via a combination of insufficient energy supplies and rising prices — especially after the power cut policy was implemented in a number of provinces in October.

Immediately following the implementation of the power cut policy, the China National Development and Reform Commission announced a notice implementing new on-grid tariffs. This notice allows the market trading price of coal-fired power in sales contracts signed between gencos and users or distributers to be raised or lowered by up to 20% of the benchmark on-grid tariff from the current 10% to 15%, respectively. However, high energy consuming industries are not limited by the 20% range, and they are likely to incur higher energy costs during periods when power is in short supply.

Even though the paper sector is not covered in the six high energy consuming industries, the market still expects another power price increase as China experiences ongoing volatility. Provinces like Yunnan, Guansu, and Jiangxi have announced that new pricing schemes will take effect in 2022. For paper manufacturers, the increase in energy costs has resulted, at least in the short term, in a continual increase in prices for finished products.

And China is not alone. The energy crunch is widespread, as producers from LatAm to Europe continue to experience rising energy prices — some directly related to impacts from the Covid-19 pandemic — which has already impacted the industry in a variety of ways. The figure below illustrates the percentage increase for pulp and paper producers’ cost of energy (which is derived from the market price for fuel and electricity) within different regions since 3Q2020. Asia Pacific has experienced the most significant increase of nearly 50% year-over-year (YoY). 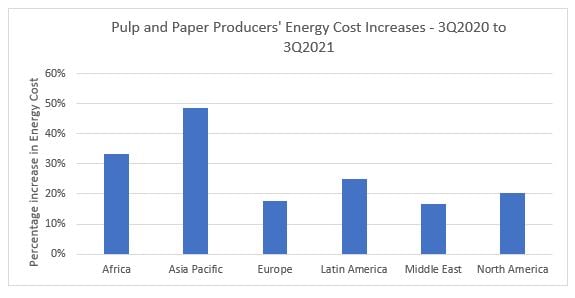 With energy costs comprising an average of 16% of the manufacturing cash cost of all the paper that is manufactured globally, the continued power crunch is driving up producer costs and ultimately reducing their margins. This is important for Asian producers because it is anticipated that the energy shortage will continue past 4Q2021 – prolonging the impacts that regional economies have faced.

This has also led many to wonder why the crisis has impacted Asia so disproportionately compared to other regions.

As illustrated below, Asia Pacific is the largest consumer of coal for fuel compared to other paper making regions globally. Specifically, the Asia Pacific region uses 90% of all coal used in the paper industry on a worldwide basis, whereas gas is the primary fuel used in most other regions. Within the region specifically, China and India are the largest consumers of coal in the paper industry. Like China, India’s pulp and paper sector is also experiencing an energy crunch that is driving mill shutdowns due to coal shortages. 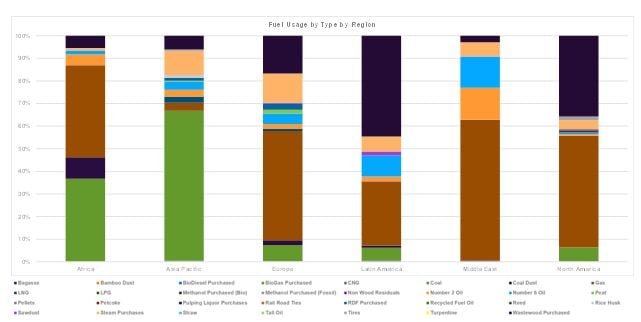 However, as China and other countries enact regulations to reduce carbon emissions, finding viable alternatives to coal-fired power will soon become a priority.

This will continue to be a difficult predicament for Asian mills in the short-term. In order to alleviate some of that stress in the long term, producers need to consider carbon restrictions that are coming down the pike, and identify viable energy alternatives that will broaden their energy portfolios as coal is phased out.

As energy shortages and rising prices continue to impact Asian paper manufacturers, producers in other regions need to keep a watchful eye on changing trends and new opportunities in which they might be more competitive, as well as their own energy costs and implications for the future. For real-time transparency into these issues via the most powerful BI platform available to participants in the P&P value chain, talk to a Fisher expert today.

There are no related posts